We were founded in Southern California as the premier provider of egg cryopreservation. On October 6, 2005, the efforts of our medical and scientific staff were honored to celebrate the birth of Cadyn Elizabeth, the first baby born from our frozen egg program. Her birth also heralded a new era in reproductive freedom for all women.

Presently, while many other fertility clinics advertise and offer egg freezing to their clients, it is estimated that fewer than 10% of clinics have ever thawed any frozen eggs and only a handful have ever achieved a live birth.

Our pioneering efforts for egg freezing began in the year 2000 at West Coast Fertility Centers when we initially addressed the needs of patients who were diagnosed with cancer and needed a technique to save their healthy, robust eggs before chemotherapy or radiation.

Other patients diagnosed with benign diseases like endometriosis or risk of premature menopause, also felt the need to preserve their desire to have children by freezing their eggs. Still, other patients with ovarian failure needed a method to procure frozen donor eggs from suitable candidates without the risks of associated with fresh egg donation.

Working under Institutional Review Board (IRB), many series of experiments were designed to modify the many variables involved in developing an effective and practical system of freezing and thawing solutions.

Most importantly however, Dr. David Diaz and his team of scientists was dedicated to maintaining the integrity of oocytes by protecting the fragile organelles from the stress of supercooling and the toxicity of chemical solutions. These critical organelles control crucial functions such as coding for protein production, metabolism and the accurate replication of chromosomes.

We were able to show in our Spindle Study that when compared to non frozen eggs, the thawed eggs maintained the integrity of the spindle apparatus which replicated the DNA inside the egg.

Another remarkable discovery we made was that during the freezing and thawing process, certain physical changes occurred in the outer zona membrane of the egg, making it necessary to physically inject a single sperm cell directly into the egg cytoplasm which activated fertilization. This is known as ICSI. Without ICSI it would be difficult for the sperm to spontaneously push through the egg’s hardened outer membrane. Once this was mastered, our team was able to document an 85% fertilization rate. 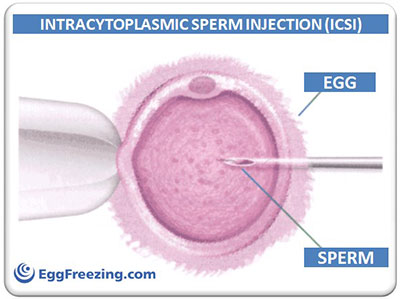 As time passed and most of the obstacles to egg freezing were overcome, WCFC developed an experimental protocol to enroll patients in a clinical trial.