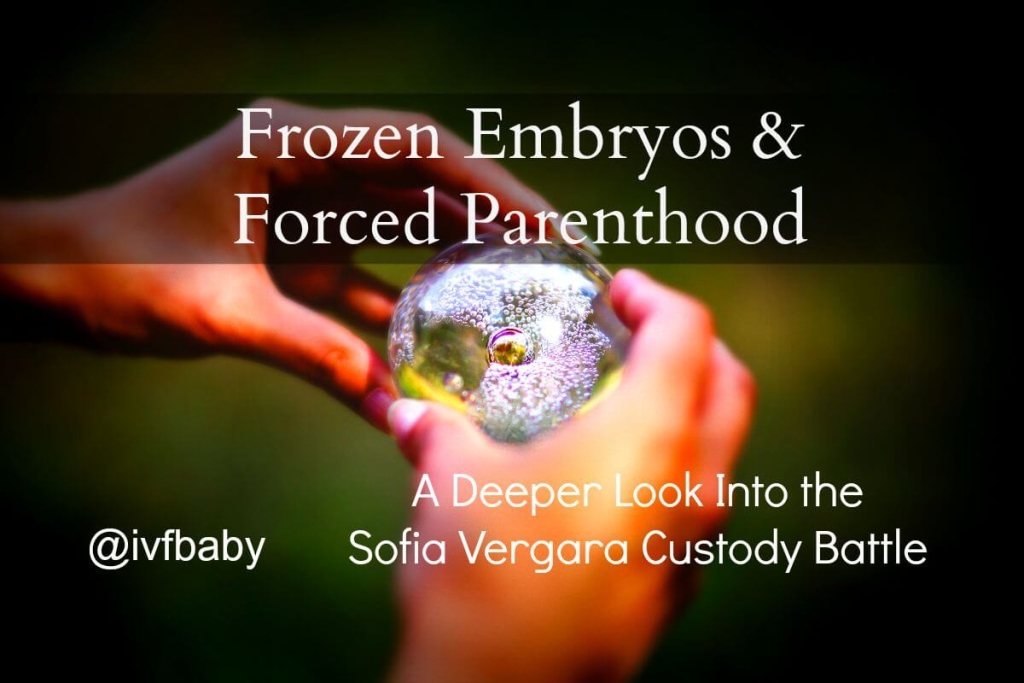 I never pondered the concept of ‘forced parenthood’ until the Sofia Vergara frozen embryo custody battle hit the headlines of all the major media outlets. The Modern Family actress and her ex-fiance, Nick Loeb, were embroiled in a conflict over the wording in a contract they both signed, when they had the embryos created, that stated that “any embryos created through the process could be brought to term only with both parties’ consent.”

Loeb basically stated that the contract should be voided since it never stated what would happen if the couple broke up. Vergara argued that a child deserves to be brought up by two people who get along and don’t hate each other, and wanted to keep them frozen indefinitely. Loeb countered that keeping them on ice indefinitely was the same as killing them.

The mere fact that Vergara and Loeb needed a contract at the creation of these embryos makes me question how solid the relationship was to begin with. Which begs the next question – why would they subject themselves to infertility treatments, that millions of couples can’t even afford, all in the name of possibly bringing them to term someday if everything went right?

Granted, I’m being judgmental here. I understand that Hollywood and high profile marriages come with baggage I can’t even begin to understand. Given some of the massive divorce settlements publicized over the last twenty years, it’s not hard to understand why prenuptial agreements are so common.

But this contract commoditizes human life. Almost like a startup business arrangement that identifies what will happen in the event the economy sours, or the relationship between the investors goes bad. Only, we’re talking about a potential baby.

Vergara continues to be criticized for her decision to keep the embryos frozen, as evidenced by the number of protesters with signs that read “Unfreeze your heart” greeting her at the premier of Magic Mike XXL.

The legal battle gained added publicity when Loeb wrote an op-ed about the situation for The New York Times, titled “Our Frozen Embryos Have a Right to Live.” In the piece, Loeb refers to a frozen embryo as an “unborn child.”

Not the First Fight Over Frozen Embryos

According to a Chicago Tribune article on this subject, this issue has been argued in the courts since the early 1990s. But since laws that cover contracts between couples vary by state, there is no consensus about what to do. Judges seem reluctant to compel a man or a woman to become a parent without their consent, according to experts on the subject.

“If I am the judge I don’t know what I would do. I certainly would put some emphasis on the contract because that was the course they chose to pursue,” said Charles Kindregan, Jr., co-author of “Assisted Reproductive Technology: A Lawyer’s Guide to Emerging Law & Science,” when asked about the Vergara case. “The question would be for me: Can I force this woman to become a mother?”

Many judges have looked to a 1992 Tennessee case between a woman in a divorcing couple who sought custody of frozen embryos, and a husband who wanted them destroyed. The state Supreme Court eventually ruled in his favor, reasoning that the embryos had to be treated differently from property that could be divided equitably, or children, whose custody is awarded based on what is best for them.

The Legal Rights of Embryos

It would seem from this conclusion that embryos have legal rights that fall someplace between property and actual live born children. That is, unless the embryos are the only means that the person seeking custody of them can have children. The Tennessee Supreme Court left this opening in their ruling, and in 2012, the Pennsylvania Supreme Court awarded frozen embryos to a woman who claimed she was unable to have children after her treatment for cancer.

The issue may also conflict with a state’s public policy on child support, as was the case with Resolve Board Member and attorney, Risa Levine. In an interview on Fox News, Levine explains “The main issue we battled over in the divorce was the embryos. He didn’t want me to be able to use them, he didn’t want to expose himself to child support in the future, and in New York you can’t waive child support. It’s against public policy. The right of child support belongs to the child.”

There is really no clear right or wrong in cases like this. Couples who create life have a responsibility to take the time to seriously consider the ramifications of what they are bringing into this world. I can say this as the father of two frozen embryos, one of which is now my 12 year old daughter. I see what the world looks like with her in it. I can’t imagine what it would be like if we had decided to keep her frozen indefinitely.

I can also understand how complex it would be to explain to a child why her biological mother or father has nothing to do with her, in the event that a court sided with the parent seeking custody after a failed relationship. Even if the custodial parent took care of all of the financial and emotional responsibilities – in a case involving a high profile star like Vergara, there would be little Vergara offspring out there, giving the media an endless supply of gossip and judging. That wouldn’t be conducive to a good quality of life for these children, and would obviously create publicity nightmares for the parent who did not want the children born.

Risa Levine summed it up perfectly with this comment from her Fox interview: “An embryo is the potential for life. You don’t create them cavalierly.”

At West Coast Fertility Centers, when embryos are frozen, informed consent is obtained from the couple to determine custody. These are decisions that need to be made beforehand.

Regarding the Vergara controversy, the problem could have been avoided by the egg freezing option. Unmarried couples should be offered the possibility of egg freezing when the possibility exists where they may become discordant about transferring frozen embryos. When eggs are frozen, they belong exclusively to the woman who produced the eggs.