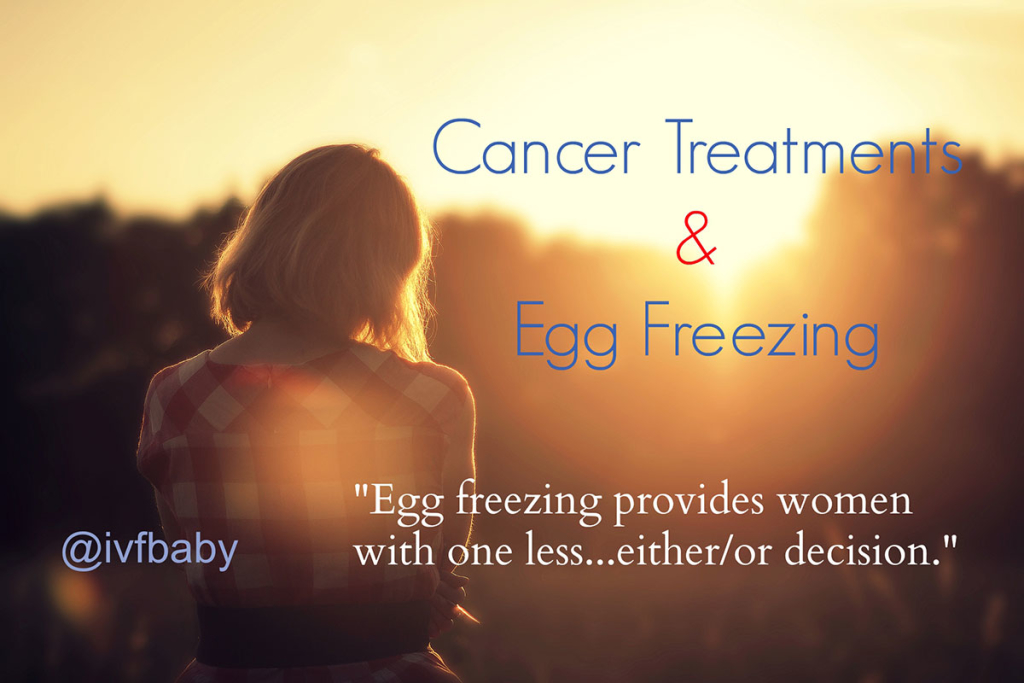 I have struggled with a way to approach this topic that is both sensitive to the women facing cancer every year, while speaking to the hardwired biological desire that women have to bear a child. I had to start by pondering what our journey would have looked like had Lisa received a cancer diagnosis before we were going through infertility.

My gut says that the last thing we would have even been considering was whether or not our future would include children. I know I would have been preoccupied with wanting to make sure I was going to still have a future with my wife.

I talked to Lisa about the topic of cancer and egg freezing and she actually gave me some interesting perspective I’d like to share.

Cancer Without an Infertility Diagnosis

Fertile people, or anyone who perceives they are fertile, take it for granted that a baby will come some day. I know we did. We had parents that had conceived multiple children without any challenges, so the idea that we would have any problems once we were ready to start our family never entered our minds.

Lisa said that mindset would have made the idea of dealing with both cancer and an egg retrieval overwhelming. To be faced with the realities of a chemotherapy regimen and the rigors of a cycle of egg growing at the same time would have been very hard to rationalize when we had never experienced how physically grueling either of these treatments can be.

I read a study from the University of California at San Francisco that indicated of the 61% of women who get infertility counseling during their cancer treatment consults, only 4% actually pursue any type of fertility-preserving measures.

I can’t help wondering if the bulk of the surveyed women were in those naïve child-bearing years when the idea of having a life-threatening disease and going through something as physically challenging as an egg retrieval would make egg freezing less important.

These women would basically have to be willing to commit to the discomfort of a full round of egg growing and extraction, immediately followed by the start of their Oncologist prescribed cancer battle plan.

Cancer With an Infertility Diagnosis

The entire egg retrieval process becomes reflexive for any woman who has gone through a half a dozen or so treatments. I am amazed at how stoic infertile women are when it comes to what they put their bodies through. Adding an egg freezing protocol to make sure they continue their pursuit of a biological child, while they gear up to battle cancer, would seem like a logical path for an infertile woman.

Veteran infertility patients are voracious readers too, and as soon as they read that chemo can cause permanent or even temporary damage to their ovaries, they would want to do something proactive like egg freezing to keep their future motherhood plans intact.

One other thing that Lisa mentioned was the stigma that might come with deciding to freeze eggs when you’re ‘supposed to be fighting for your life’. Infertile women live in a world that is filled with a lack of social graces about the topic of infertility. Add cancer to the mix, and things just get worse.

“Why are you even thinking about having a baby when you don’t even know what’s going to happen with your cancer? What if you get your cancer back, and you die when your child is young?” These are just a few of the guilt-tripping comments that I’m sure would come pouring out of the infertility ignorant universe that we exist in.

Lisa brought up a great point on this topic. Millions of women die from obesity, diabetes and heart disease every year, but they aren’t discouraged from having a child simply because they have poor health from these illnesses.

The same should apply to cancer: no woman should ever be discouraged from taking whatever measures she deems necessary to get her dream baby. And the simple truth is, it’s nobody’s business but the woman who is going through it.

The other beautiful thing that egg freezing offers women is the peace of mind of knowing that they at least have a viable part of themselves frozen in time for a potential future child, without the guilt that many women feel about freezing an embryo. A woman with cancer is likely to lose more sleep over whether she will ever get to meet the product of that thawed out embryo, than the potential that frozen egg holds.

Freezing eggs gives women the time they need to battle their cancer, and when they win, to pick up where they left off without the fear of whether their ovaries will be able to produce any more eggs.