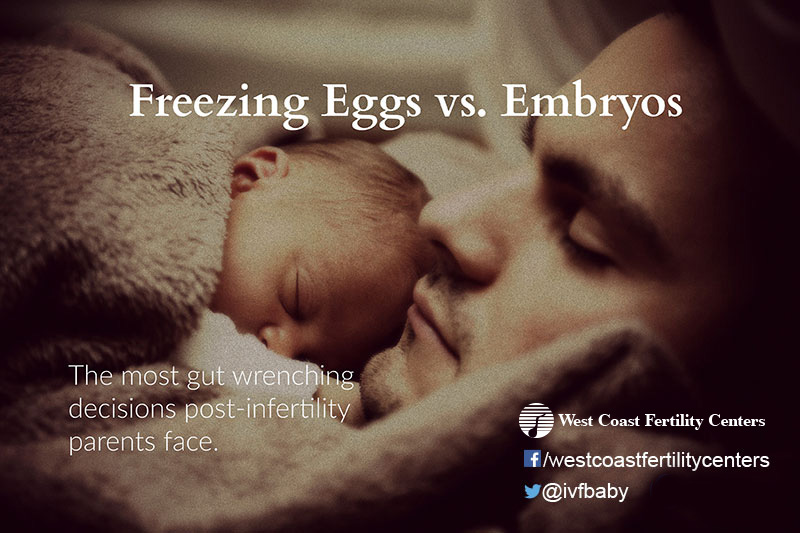 Having experienced infertility for six years, I often assume people know the difference between eggs and embryos. However, conversations in recent years with couples who have never gone through infertility revealed a tendency to use egg and embryo interchangeably.

In simple terms, eggs are what the woman provides to the biological baby-making equation. They have the potential to become an embryo with the introduction of the sperm if the sperm actually fertilizes the egg. If that happens, the cells start dividing, and all of the basic components of a human being exist. If all goes well with the transfer of that embryo to the uterus, a baby is born about 9 months later.

Lisa and I were lucky that our last two frozen embryos were ultimately the ones that made us parents. Over the years as we have kept in touch with other couples from our support groups, we’ve found that one of the less talked about, but most gut-wrenching decisions post infertility parents face is what to do with their frozen embryos.

Donate them to science. Discard them. Offer them up for adoption.

The couples I know that have donated their embryos to science held deep beliefs about the good their embryos could do for scientists trying to make medical breakthroughs to cure diseases. Keeping them in a freezer when they already have the family they want, in their opinion, is irresponsible.

Offering them up for adoption is especially hard when embryo donors become the decision-makers about the future of another fertility-challenged couple. On one hand, it is hard to blame the embryo donors for using some discretion in the decision-making process. After all, they can visualize the fruits of their efforts already, so it’s only natural for them to want to be able to create a favorable future for the frozen siblings of their live children.

The donor mothers in these situations often play out scenes where they run into the adoptive family somewhere, and see them not being treated well, or not being disciplined well, and then try to process how they will react in the event they find they’ve made a mistake.

To the prospective parents, this experience is agonizing, as often these adoption meetings are being held with multiple prospects, meaning someone is likely not to get chosen. I’ve also spoken to prospective parents who worried that maybe the batch of frozen embryos they got might not be as good of quality as the ones the other couple got. It adds insult to the injury of couples who have usually already gone through the rejection of failed IVF cycles before getting to the point where they are brave enough to even consider adopting someone else’s embryos.

Egg freezing can help couples avoid, or at least mitigate a future filled with an overabundance of frozen embryos. I know when we froze our embryos, they were our babies. They were viable potential children – all the components in their fledgling state of development. No matter how hard our psychologist or the doctors tried to assign less personal medical terms like ‘blastocyst’ or ‘dividing cells,’ we saw the shadow of a little boy with Lisa’s temper and passion or a little girl with my eyes.

In most cases, a certain number of eggs are harvested and not fertilized, but frozen so that in the event they get pregnant with a fresh IVF, there are not as many embryos to have to make decisions about later on.

We didn’t get that same sense of connection when we would see the follicles developing in Lisa’s ovary, so I can see how egg freezing might take some of the pressure off of a couple about having a lot of unused embryos on ice.

Hopefully, infertility clinics will begin counseling couples about these combination egg freezing and embryo freezing options, especially if the aspiring parents have ethical or religious concerns about what to do with their frozen embryos in the event they are lucky enough to get pregnant on their first or second IVF cycle.