Home / Health & Medicine / Who Egg Freezing Is For

Who Egg Freezing Is For 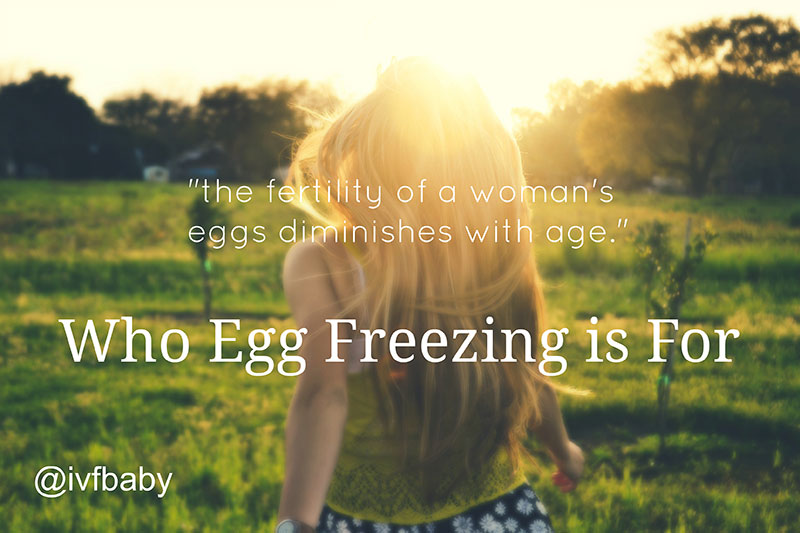 When I first heard about egg freezing, it was in the context of allowing women to protect their reproductive biology from the harmful effects of chemotherapy during cancer treatment. One of the side effects of a chemotherapy regimen is its potential to cause temporary or permanent damage to a woman’s ovaries. By freezing the eggs before treatment, women can preserve their future fertility while they are going through and then recovering from cancer. I’ve met women who proudly show off pictures of the babies they are now raising, just years after their cancer treatments ended.

Recently, I read about egg freezing cocktail parties in New York City where career track women are encouraged to preserve their younger biological eggs for future use. This will allow them to avoid multiple cycles of IVF inherent in trying to get pregnant later in life with aged oocytes (the fancy medical word for eggs). As women cross over the age of thirty and into their forties, success rates with their own biological eggs drop substantially even with high tech procedures like IVF. This is because the fertility of a woman’s eggs diminishes with age. These eggsicles allow women to thaw their twenty-something eggs to put into their thirty or forty year old bodies, increasing the prospects for successful IVF outcomes.

While much of the publicity about egg freezing has revolved around high profile reality TV stars and other celebrities taking advantage of this new technology, there is a movement underway to make career women in all walks of life aware of the egg freezing option. Egg freezing allows women to choose to build their families at times when they are the most financially sound and stable in their careers. With a minimum of four years of college required for most career positions, and a master’s or Ph.D. becoming a more desirable education level for high profile management and executive positions, it’s not uncommon to find women in their early thirties before their careers really take off.

I remember about four years into our infertility journey, my wife Lisa was agonizing trading a full ride Ph.D. scholarship, in a state we really wanted to live in, for the disappointment of failure after failure with assisted reproduction. A friend from one of our support groups who had made the decision to pursue her career first said to her, “You’ll always have your career. You need to do this now before it’s too late to have a baby from your own eggs.”

What struck me about those words was how ‘either/or’ the proposition was. Delay your career to ensure you can use your owns eggs for biology. Egg freezing wasn’t an option for us. It wasn’t an option for Lisa’s friend. Although our stories ended happily with us having a daughter and our friend having twin boys, I wonder how things would have played out if egg freezing had been an option back then.

Is It For You?

It is important to mention who egg freezing is not for.

Based on the discomfort involved in the egg growing and extraction process, women with a low tolerance for pain and discomfort may find the process unbearable. Over the years in support groups there were at least a few occasions where members chose to pursue a non-biological child because they didn’t want to endure the rigors of the examinations, blood draws, ultrasound wands, bloating, and the post egg extraction pain that an IVF involved.

Except for the actual embryo creation, egg freezing requires all of the normal protocols to harvest the eggs that an IVF does, and no woman I’ve met ever said it was an easy thing. Definitely worth it in the end when she was holding her baby, but not easy.

Finally, egg freezing gives women the opportunity to give back if they want to. Men have been contributing their biology to fertility challenged couples for decades with sperm banks. Now egg donor banks enable aspiring parents to choose both donor sperm and donor eggs to create their donor embryos.