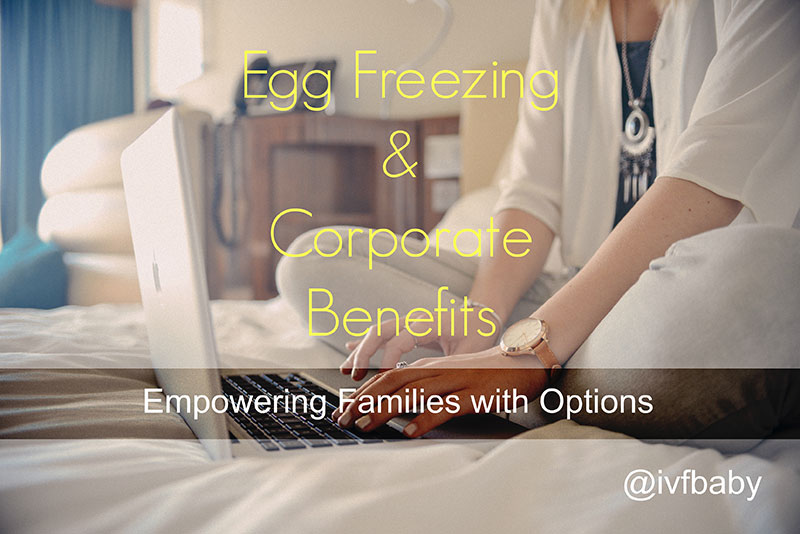 Over the past few months, there has been a lot of press about egg freezing. Facebook, Apple, and Citigroup announced late last year that their benefits would now cover the cost for women to freeze their eggs. Heck, even Kim Kardashian went to a consult appointment on her show, Keeping up with the Kardashians.

Of course, with anything new, there is controversy surrounding egg freezing. Some have questioned the motives for a company to cover the cost of egg-freezing. Could they be suggesting that their female employees focus on their career and put off child-bearing? There is also the ethics question – it’s an invasive procedure that should not be taken lightly.

Should healthy, fertile women put their bodies through this, just so they can put off child-bearing for a few more years? That is compounded by the fact that the older you get, the more potential complications arise from pregnancy.

Lots to think about for sure. Ultimately, it all comes down to options.

The answer, like so many things in life, is not black and white. There are pros and cons to each side of the story. A few years ago, a friend of mine found out at the ripe age of 25 that she was menopausal. While the exact term of her diagnosis escapes me, she turned to an egg donor and is now a mama to two adorable eight-month-olds.

Her condition ended up being an autoimmune disorder. She was the oldest of three sisters, so her other two sisters got tested. One, so far, is fine. The other, in high school, does not appear to be. Her parents are now forced to have a conversation with their high-schooler about freezing her eggs while she can, so she can have hope of a biological child some day.

Can you imagine? Parents are supposed to be reinforcing NOT getting pregnant at that stage of life. (Not that they’re encouraging her to get pregnant now by any means.) I think back to myself at age 17/18 – and my thoughts generally revolved around when the next *NSYNC album was coming out and who was going to the mall that weekend, not freezing my eggs.

Her family is lucky though. They have the means to give their daughter that option. Not a lot of people would. While costs vary from clinic to clinic, somewhere between $10,000 – $15,000 for the harvest, in addition to on-going storage costs to keep the eggs frozen after that. I don’t know about you, but that is a lot of money to me.

My point is, egg freezing is giving women and their partners options for creating their family. It’s definitely not something you decide to do on a whim because you’re bored. It’s expensive and invasive. Women and their partners who are considering egg freezing should focus on what they want in order to choose the right path for them. Given what a woman must go through in order to freeze her eggs, I would hope they would put a lot of thought into their decision.

To question the motives of a company who offers egg freezing as a benefit, suggesting that they would rather have their employees focus on their careers, is a baseless accusation. While the benefit is there, the choice to utilize the benefits lies with their female employees. Giving people options to figure out what is best for their family is generally a positive thing.

I personally would be appreciative if my employer was helping to give me options for such a decision. For my personal situation, my husband and I have zero fertility coverage for insurance. Every test, drug, and ultrasound is completely out of pocket. While egg-freezing is not in our immediate plans, I am personally all for any type of fertility coverage employers can offer their employees.

Finally, we need to address the ethics of egg freezing and whether or not young, healthy women of childbearing age should put their bodies through an invasive procedure if it is not immediately needed. The catch with this is, you don’t always know when it is going to become necessary. One day, you think everything is fine and then the next day, a doctor tells you that you have no eggs, cancer, or any other life-threatening condition. Egg-freezing gives people options.

Egg-freezing is definitely not for everyone. But for others, it provides an option for creating their family, especially if they suffer from a potentially life-threatening diagnosis. Giving people options empowers them to make decisions that are right for them and their family, which allows them to lead happy, fulfilling lives.